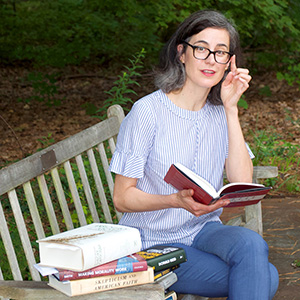 Nestled among the tall pines in the heart of North Carolina, the National Humanities Center is a special place for scholars—a place where they can gather to think, study, and write—helping to deepen our understanding of the world and our place in it.

Join us as we take a series of virtual audio journeys through the intellectual woods with cohosts Robert D. Newman, Matthew M. Booker, Tania Munz, and Brooke Andrade as they survey some of the compelling topics being studied by historians and philosophers, scholars of literature, art, and other fields who come to the Center from all over the world.

This podcast series was made possible with support from William and Sandra Moore, as well as our NHC Institutional Sponsors.

In Our Image, Part 1: Building a Moral Machine

In Our Image, Part 2: The AI Future is Now

Artificial intelligence challenges us to reconsider the powerful influence technologies have in our lives, the distinctions we make between human beings and machines, and to think carefully about how to deploy AI in ways that benefit humanity, reduce negative societal and environmental impacts, and encouraging human flourishing. Episode host: Brooke Andrade. Interviewer: Robert D. Newman. Interviewees: Paul Alivisatos, provost and executive vice chancellor, Samsung Distinguished Professor of nanoscience and nanotechnology, University of California, Berkeley; Tobias Rees, Reid Hoffman Professor at The New School of Social Research and director of the Berggruen Institute; Abby Smith Rumsey, Center for Advanced Study in the Behavioral Sciences; and Şerife (Sherry) Wong, artist, Icarus Salon and researcher at the Berggruen Institute.

Composed: Musical and Literary Connections Through the Ages

This episode explores the relationship between literature and music across time, specifically during the Italian Renaissance and in late twentieth-century America, and across and among genres, poetry and literary prose, ballads, rock music, and hip hop. Episode host: Matthew M. Booker. Interviewer: Robert D. Newman. Interviewees: Blake Wilson (Fellow 2016–17), Florence Dore (Fellow, 2008–09; 2016–17), and Professor A.D. Carson from the University of Virginia.

Dear Readers: What Happens When We Sit Down with a Good Book?

Form & Function: The Arts’ Influence in the World Around Us

In this episode of Nerds in the Woods, we talk with three scholars about how form and function work together, investing objects with meaning and resonance in our lives, whether in art and architecture, literary forms, or the stuff of everyday life. Episode host: Robert D. Newman. Interviewers: Robert D. Newman, Joan Hinde Stewart, and Tania Munz. Interviewees: Hollis Robbins (Fellow, 2017–18), Sonja Drimmer (Fellow, 2019–20), and Elizabeth Otto (Fellow, 2017–18).

Black Power Politics: Tracing the Effects of a Movement

In this episode, we sit down with two scholars whose work complicates our understanding of black power politics and the scope of its influence outside of the U.S. cities with which it is most often associated. Episode host: Matthew M. Booker. Interviewer: Robert D. Newman. Interviewees: Jakobi Williams (Fellow, 2016–17) and Katherine Mellen Charron (Fellow, 2019–20).

Excursions: Revisiting the History of the Caribbean

This episode takes us on an intellectual voyage through the Caribbean, exploring its historical, political, and cultural importance over the course of the past several centuries. Episode host: Tania Munz. Interviewer: Robert D. Newman. Interviewees: Rebecca Goetz (Fellow, 2018–19), Marlene Daut (Fellow, 2016–17), and Matthew Smith (Fellow, 2018–19).