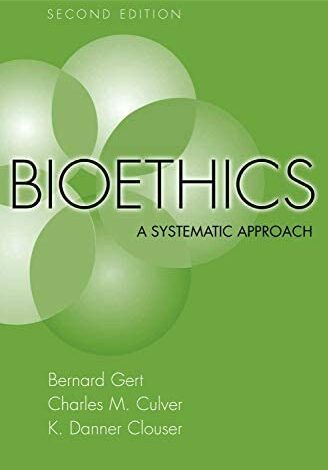 This book is the result of over 30 years of collaboration among its authors. It uses the systematic account of our common morality developed by one of its authors to provide a useful foundation for dealing with the moral problems and disputes that occur in the practice of medicine. The analyses of impartiality, rationality, and of morality as a public system not only explain why some bioethical questions, such as the moral acceptability of abortion, cannot be resolved, but also provide a method for determining the correct answer for those occasions when a bioethical question has a unique correct answer. This new edition includes an entire chapter that has been added to address the controversial issue of abortion within the authors' distinct framework.

This book presents the latest revisions of the authors' original analyses of the concepts of death and disease, analyses that have had a significant impact on the field of bioethics. It also includes an added chapter on mental disorders, where the authors' definition influenced what psychiatry classifies as a mental disorder, and so has had an impact that reveals beyond the field of bioethics.

In this edition, the authors also offer a new, more developed perspective on the concept of valid or informed consent by considering what information physicians should be required to know before proposing screening, diagnostic testing, prescribing medications, or performing surgery. The book also integrates some of the important insights of the field of clinical epidemiology into its discussion of valid consent. Its account of paternalism and its justification, perhaps the most ubiquitous moral problem in medical ethics, has had considerable influence. Its discussion of euthanasia and physician assisted suicide challenges the standard views that have been put forward by both proponents and opponents of physician assisted suicide and voluntary active euthanasia.