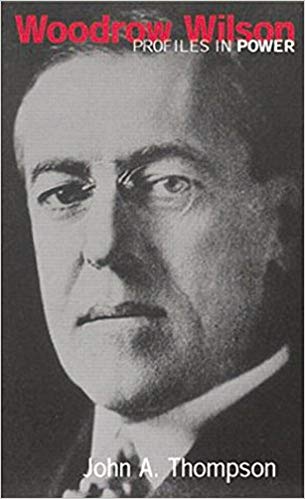 Most famous in Europe for his efforts to establish the League of Nations under US leadership at the end of the First World War, Woodrow Wilson stands as one of America’s most influential and visionary presidents. A Democrat who pursued progressive domestic policies during his first term in office, he despised European colonialism and believed that the recipe for world peace was the self-determination of all peoples, particularly those under the yoke of the vast Ottoman and Austro-Hungarian Empires.  His efforts to resist heavy reparations on Germany fell on deaf ears, while the refusal of France, Russia and Britain to accept a League of Nations led by America, together with the US Senate’s refusal to ratify the League, led to its ultimate failure.

Woodrow Wilson has traditionally been seen by both admirers and critics as an idealist and a heroic martyr to the cause of internationalism. But John Thompson takes a different view, arguing that  Wilson was a pragmatist, whose foreign policy was flexible and responsive to pressures and events.  His conclusion, that Wilson was in fact an exceptionally skilful politician, who succeeded in maintaining national unity whilst leading America onto the world stage for the first time in its history, offers a challenging interpretation for anyone interested in the man and his era.