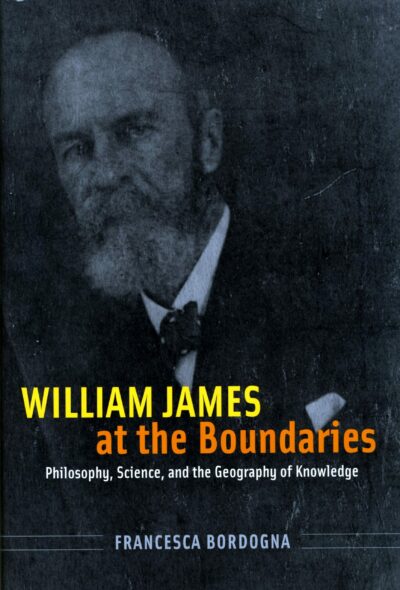 Chicago: The University of Chicago Press, 2008

At Columbia University in 1906, William James gave a highly confrontational speech to the American Philosophical Association (APA). He ignored the technical philosophical questions the audience had gathered to discuss and instead addressed the topic of human energy. Tramping on the rules of academic decorum, James invoked the work of amateurs, read testimonials on the benefits of yoga and alcohol, and concluded by urging his listeners to take up this psychological and physiological problem.

What was the goal of this unusual speech? Rather than an oddity, Francesca Bordogna asserts that the APA address was emblematic—it was just one of many gestures that James employed as he plowed through the barriers between academic, popular, and pseudoscience, as well as the newly emergent borders between the study of philosophy, psychology, and the “science of man.” Bordogna reveals that James’s trespassing of boundaries was an essential element of a broader intellectual and social project. By crisscrossing divides, she argues, James imagined a new social configuration of knowledge, a better society, and a new vision of the human self. As the academy moves toward an increasingly interdisciplinary future, William James at the Boundaries reintroduces readers to a seminal influence on the way knowledge is pursued.

Bordogna, Francesca (NHC Fellow, 2006–07). William James at the Boundaries: Philosophy, Science, and the Geography of Knowledge. Chicago: The University of Chicago Press, 2008.