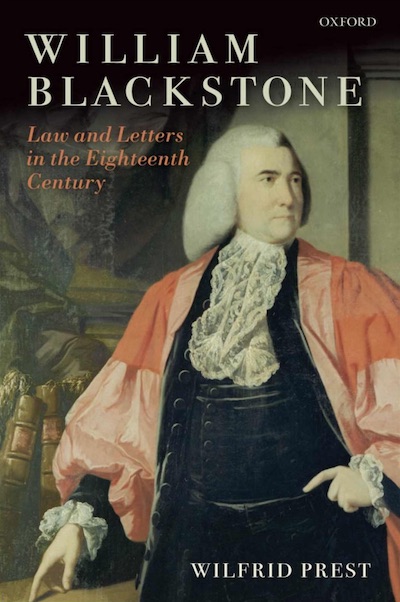 This is the first comprehensive account of the life and writings of William Blackstone, whose Commentaries on the Laws of England remains the most celebrated and influential text in the Anglo-American common-law tradition. Based on the widest possible range of archival, manuscript, and printed sources, it presents a rounded and engaging picture of the man and his work.

Lawyer, judge, politician, poet, teacher, man of business, and student of architecture, Sir William Blackstone was a major figure in mid-18th century public life. Over a varied and brilliant career he made profound contributions to English politics, law, education, and culture through involvements in legal practice, the legislature, and the University of Oxford. Throughout he also remained engaged in his society's literary, scholarly, and spiritual life.

Yet despite the breadth and influence of his work, Blackstone the man remains little known and poorly understood, the lack of engagement with his public and private life standing in stark contrast to the scale of his influence, particularly on the development and teaching of the law. Blackstone's great book has inevitably overshadowed its author, while the dispersal of his personal and professional papers further complicates the task of understanding the man behind the book. Further, the lack of a thorough account of Blackstone's life has fueled controversy about his intellectual character and political outlook. This biography makes full use of a considerable body of new evidence to shed light on an unduly neglected figure in English and American history. It explores Blackstone's family background, schooling, university career, legal practice, literary achievements and academic initiatives, domestic life and political activities, religious views, and Enlightenment principles.