By George of Trebizond
Edited and translated by John Monfasani (NHC Fellow, 2011–12) 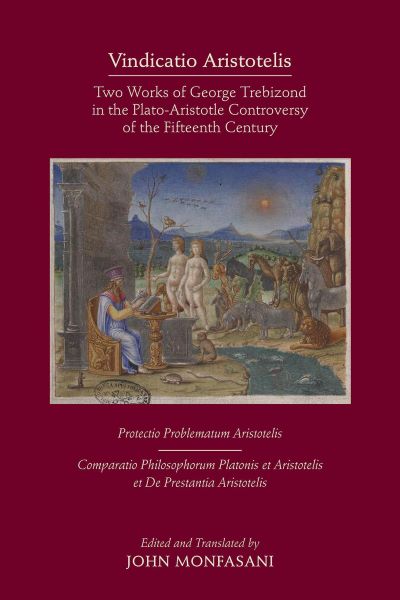 The Greek philosopher George of Trebizond started the Plato-Aristotle Controversy of the Renaissance with two works published in Rome in the late 1450s. The first was his  Protectio Aristotelis Problematum (The Protection of Aristotle’s Problemata), which was as much a treatise on translation as it was a polemic in defense of Aristotle. The second was his Comparatio Philosophorum Platonis et Aristotelis (A Comparison of the Philosophers Plato and Aristotle).

This publication is the critical edition. It analyze the background, themes, and arguments of the works, as well as offering the texts themselves in new English translations.

Monfasani, John (NHC Fellow, 2011–12), ed. and trans. Vindicatio Aristotelis: Two Works of George of Trebizond in the Plato-Aristotle Controversy of the Fifteenth Century, by George of Trebizond. Tempe: Arizona Center for Medieval and Renaissance Studies, 2021.