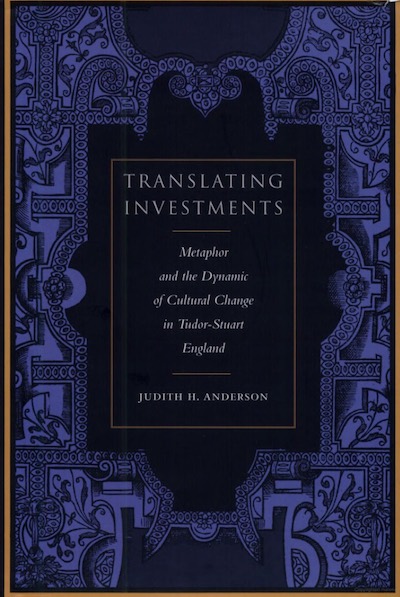 While Anderson's overarching concern is with metaphor as a creative exchange, a source of code-breaking conceptual power, each of her chapters focuses on a different but related issue and cultural sector. Foci include the basic conditions of linguistic meaning in the early modern period, instantiated by Shakespeare's plays and related to modern theories of metaphor; the role of metaphor in the words of eucharistic institution under Archbishop Cranmer; the play of metaphor and metonymy in the writings of Luther, Zwingli, and Calvin and in John Donne's Devotions; the manipulation of these two tropes in the politics of the controversy over ecclesiastical vestments and in its treatment by John Foxe; the abuse of figuration in the house of Edmund Spenser's Busirane, where catachresis, an extreme form of metaphor, is the trope du jour; the conception of metaphor in the Roman rhetorics and their legacy in the sixteenth century; and the concept of exchange in the economic writing of Gerrard de Malynes, merchant and metaphorist in the reigns of Elizabeth and James. What emerges at the end of this book is a heightened critical sense of the dynamic of metaphor in cultural history.