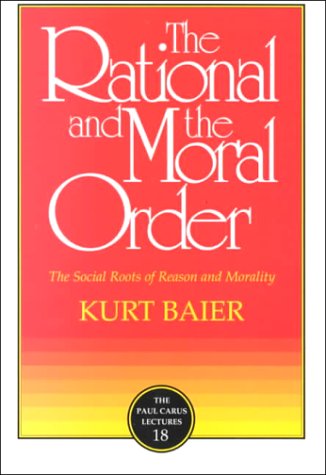 'The Rational and the Moral Order' is a significant book providing a comprehensive theory of morality. The opening chapter is simply marvellous. Baier provides a cogent response to Hume's conundrums on practical reasoning: logical entailment, he argues, is not the correct model of the relation between reasons and that for which they are reasons. Indeed, the giving of reasons is, in part, a social enterprise, and there is no necessary connection between rationality and self-interest.

In the concluding chapter Baier shows how his theoretical framework can be used to confront some of the moral problems people face, problems which have also exercised contemporary philosophers. Though there are many philosophers who believe that killing is worse than letting anyone die, there are few that defend the view other than by raw intuition. Baier deploys the resources of his theory of morality in support of this widely shared but poorly defended viewpoints.