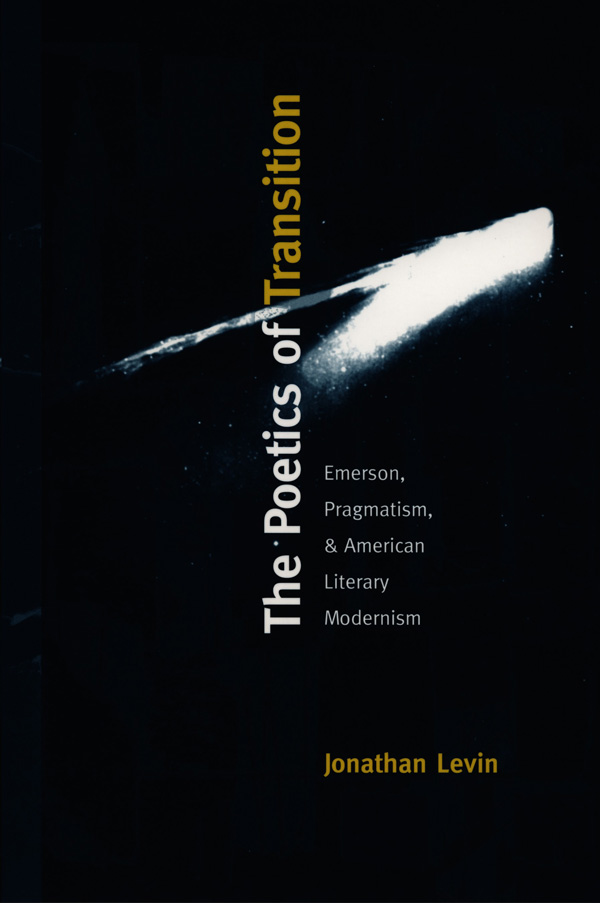 The Poetics of Transition examines the connection between American pragmatism and literary modernism by focusing on the concept of transition as a theme common to both movements. Jonathan Levin begins with the Emersonian notion that transition—the movement from one state or condition to another or, alternately, the figural enactment of that movement—is infused with power. He then offers a revisionary reading of the pragmatists’ view of the permeability of subjective and objective realms and of how American literary modernists stage this permeability in the language and form of their writing.

Levin draws on the pragmatist and neopragmatist writings of William James, John Dewey, George Santayana, Richard Rorty, and Cornel West to illuminate the work of modernist literature. In turn, he illuminates the poetic imperatives of pragmatism by tracing the ways in which Henry James, Gertrude Stein, and Wallace Stevens capture the moment of transition—a paradoxical moment that, once it is represented in language or art, requires its own perpetual overcoming. Throughout, he explores how modernist writers, who are masters at recording such “illegible” moments of transition in their poetry and prose, significantly contribute to an expanded understanding of pragmatism and its underlying aesthetics. By linking Emerson with the progressive philosophy of turn-of-the-century pragmatism and the experimentation of American literary modernism, Levin offers new insight into Emerson’s lasting influence on later American philosophers, novelists, and poets.

The Poetics of Transition will interest scholars and students in the fields of literary criticism, neopragmatism, literary modernism, and American literature.