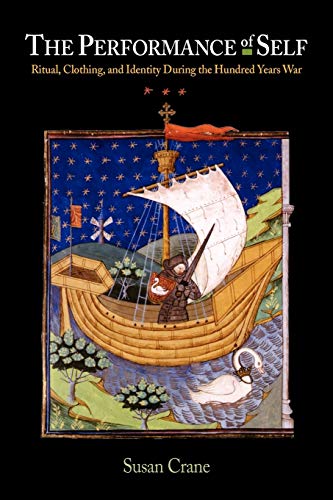 Medieval courtiers defined themselves in ceremonies and rituals. Tournaments, Maying, interludes, charivaris, and masking invited the English and French nobility to assert their identities in gesture and costume as well as in speech. These events presumed that performance makes a self, in contrast to the modern belief that identity precedes social performance and, indeed, that performance falsifies the true, inner self. Susan Crane resists the longstanding convictions that medieval rituals were trivial affairs, and that personal identity remained unarticulated until a later period.

Focusing on England and France during the Hundred Years War, Crane draws on wardrobe accounts, manuscript illuminations, chronicles, archaeological evidence, and literature to recover the material as well as the verbal constructions of identity. She seeks intersections between theories of practice and performance that explain how appearances and language connect when courtiers dress as wild men to interrupt a wedding feast, when knights choose crests and badges to supplement their coats of arms, and when Joan of Arc cross-dresses for the court of inquisition after her capture.

Crane, Susan (NHC Fellow, 1999–00). The Performance of Self: Ritual, Clothing, and Identity During the Hundred Years' War. The Middle Ages Series. Philadelphia: University of Pennsylvania Press, 2002.