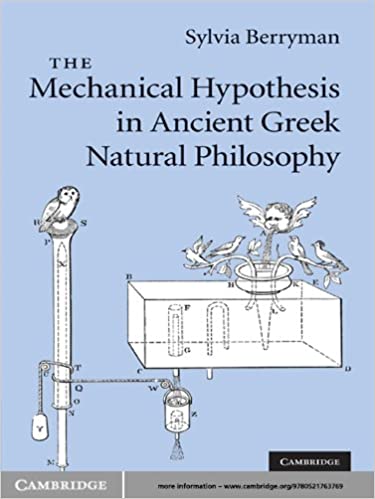 It has long been thought that the ancient Greeks did not take mechanics seriously as part of the workings of nature, and that therefore their natural philosophy was both primitive and marginal. In this book Sylvia Berryman challenges that assumption, arguing that the idea that the world works 'like a machine' can be found in ancient Greek thought, predating the early modern philosophy with which it is most closely associated. Her discussion ranges over topics including balancing and equilibrium, lifting water, sphere-making and models of the heavens, and ancient Greek pneumatic theory, with detailed analysis of thinkers such as Aristotle, Archimedes, and Hero of Alexandria. Her book shows scholars of ancient Greek philosophy why it is necessary to pay attention to mechanics, and shows historians of science why the differences between ancient and modern reactions to mechanics are not as great as was generally thought.