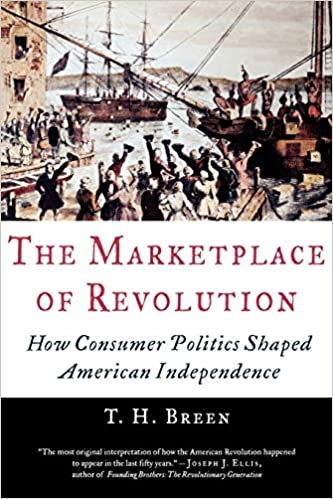 The Marketplace of Revolution offers a boldly innovative interpretation of the mobilization of ordinary Americans on the eve of independence. Breen explores how colonists who came from very different ethnic and religious backgrounds managed to overcome difference and create a common cause capable of galvanizing resistance. In a richly interdisciplinary narrative that weaves insights into a changing material culture with analysis of popular political protests, Breen shows how virtual strangers managed to communicate a sense of trust that effectively united men and women long before they had established a nation of their own.

The Marketplace of Revolution argues that the colonists' shared experience as consumers in a new imperial economy afforded them the cultural resources that they needed to develop a radical strategy of political protest--the consumer boycott. Never before had a mass political movement organized itself around disruption of the marketplace. As Breen demonstrates, often through anecdotes about obscure Americans, communal rituals of shared sacrifice provided an effective means to educate and energize a dispersed populace. The boycott movement--the signature of American resistance--invited colonists traditionally excluded from formal political processes to voice their opinions about liberty and rights within a revolutionary marketplace, an open, raucous public forum that defined itself around subscription lists passed door-to-door, voluntary associations, street protests, destruction of imported British goods, and incendiary newspaper exchanges. Within these exchanges was born a new form of politics in which ordinary man and women--precisely the people most often overlooked in traditional accounts of revolution--experienced an exhilarating surge of empowerment.

Breen recreates an "empire of goods" that transformed everyday life during the mid-eighteenth century. Imported manufactured items flooded into the homes of colonists from New Hampshire to Georgia. The Marketplace of Revolution explains how at a moment of political crisis Americans gave political meaning to the pursuit of happiness and learned how to make goods speak to power.