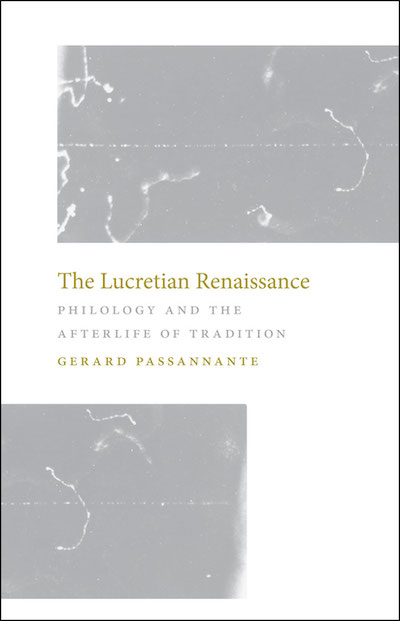 With The Lucretian Renaissance, Gerard Passannante offers a radical rethinking of a familiar narrative: the rise of materialism in early modern Europe. Passannante begins by taking up the ancient philosophical notion that the world is composed of two fundamental opposites: atoms, as the philosopher Epicurus theorized, intrinsically unchangeable and moving about the void; and the void itself, or nothingness. Passannante considers the fact that this strain of ancient Greek philosophy survived and was transmitted to the Renaissance primarily by means of a poem that had seemingly been lost—a poem insisting that the letters of the alphabet are like the atoms that make up the universe.

By tracing this elemental analogy through the fortunes of Lucretius’s On the Nature of Things, Passannante argues that, long before it took on its familiar shape during the Scientific Revolution, the philosophy of atoms and the void reemerged in the Renaissance as a story about reading and letters—a story that materialized in texts, in their physical recomposition, and in their scattering.

From the works of Virgil and Macrobius to those of Petrarch, Poliziano, Lambin, Montaigne, Bacon, Spenser, Gassendi, Henry More, and Newton, The Lucretian Renaissance recovers a forgotten history of materialism in humanist thought and scholarly practice and asks us to reconsider one of the most enduring questions of the period: what does it mean for a text, a poem, and philosophy to be “reborn”?

Passannante, Gerard (NHC Fellow, 2010–11). The Lucretian Renaissance: Philology and the Afterlife of Tradition. Chicago: The University of Chicago Press, 2010.