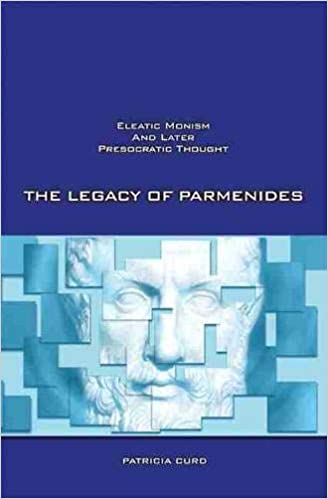 In this book, Patricia Curd argues that Parmenides sought to reform rather than to reject scientific inquiry, and she offers a more coherent account of his influence on later philosophers.The Legacy of Parmenides examines Parmenides' arguments, considering his connection to earlier Greek thought and how his account of what-is could have served as a model for later philosophers. Curd also explores the theories of his successors, including the Pluralists (Anaxagoras and Empedocles), the Atomists (Leucippus and Democritus), the later Eleatics (Zeno and Melissus), and the later Presocratics (Philolaus of Croton and Diogenes of Apollonia). She concludes with a discussion of the importance of Parmenides' work to Plato's Theory of Forms.The Legacy of Parmenides challenges traditional views of early Greek philosophy and provides new insights into the work of Parmenides.