The Corrupter of Boys: Sodomy, Scandal, and the Medieval Clergy - National Humanities Center 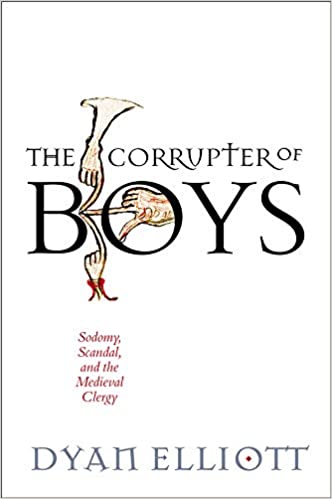 In the fourth century, clerics began to distinguish themselves from members of the laity by virtue of their augmented claims to holiness. Because clerical celibacy was key to this distinction, religious authorities of all stripes—patristic authors, popes, theologians, canonists, monastic founders, and commentators—became progressively sensitive to sexual scandals that involved the clergy and developed sophisticated tactics for concealing or dispelling embarrassing lapses. According to Dyan Elliott, the fear of scandal dictated certain lines of action and inaction, the consequences of which are painfully apparent today. In The Corrupter of Boys, she demonstrates how, in conjunction with the requirement of clerical celibacy, scandal-averse policies at every conceivable level of the ecclesiastical hierarchy have enabled the widespread sexual abuse of boys and male adolescents within the Church.

Elliott examines more than a millennium's worth of doctrine and practice to uncover the origins of a culture of secrecy and concealment of sin. She charts the continuities and changes, from late antiquity into the high Middle Ages, in the use of boys as sexual objects before focusing on four specific milieus in which boys and adolescents would have been especially at risk in the high and later Middle Ages: the monastery, the choir, the schools, and the episcopal court.

The Corrupter of Boys is a work of stunning breadth and discomforting resonance, as Elliott concludes that the same clerical prerogatives and privileges that were formulated in late antiquity and the medieval era—and the same strategies to cover up the abuses they enable—remain very much in place.