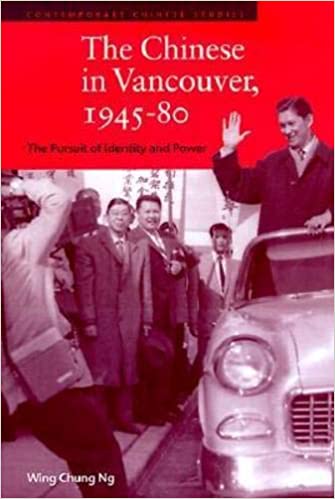 In The Chinese in Vancouver, Wing Chung Ng captures the fascinating story of the city’s Chinese in their search for identity. He juxtaposes the cultural positions of different generations of Chinese immigrants and their Canadian-born descendants and unveils the ongoing struggle over the definition of being Chinese. It is an engrossing story about cultural identity in the context of migration and settlement, where the influence of the native land and the appeal of the host city continued to impinge on the consciousness of the ethnic Chinese.

The Chinese in Canada is long overdue in view of the many previous studies that tend to describe Chinese people as victims of racial prejudice and discrimination and Chinese identity a matter of Western cultural hegemony. Ng’s account gives the Chinese people their own voice and shows that the Chinese in Vancouver had much to say and often disagreed about the meaning of being Chinese.

In his concluding chapter, Ng looks beyond the Canadian context by engaging in a comparative discussion of the experiences of ethnic Chinese elsewhere in the diaspora. References to the Chinese in various Southeast Asian countries and the U.S. force a rethinking of “Chineseness.” He ends with reflections about Vancouver’s Chinese community since 1980.