Staging Fascism: "18 BL" and the Theater of Masses for Masses - National Humanities Center 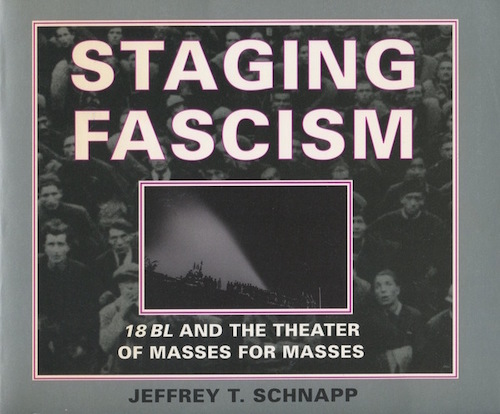 On an April evening in Florence in 1934, before 20,000 spectators, the mass spectacle 18BL was presented, involving 2000 amateur actors, an air squadron, one infantry and cavalry brigade, fifty trucks, four field and machine gun batteries, ten field-radio stations and six photoelectric units. However titantic its scale, 18BL's ambitions were even greater: to institute a revolutionary fascist theatre of the future, a modern theatre of and for the masses that would end the crisis of the bourgeois theatre. This is the complete story of the event, a colossal failure to critics and spectators alike, which the fascist government took pains to expunge from the annals of the regime. The detailed reconstruction of these various aspects of 18BL serves as a springboard for a larger inquiry into the place of media, technology, and machinery in the fascist imagination, particularly in its links to fascist models of narrative, historiography, spectacle, and subjectivity.