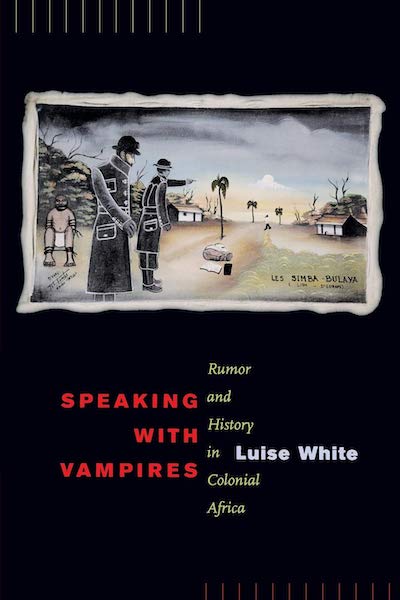 During the colonial period, Africans told each other terrifying rumors that Africans who worked for white colonists captured unwary residents and took their blood. In colonial Tanganyika, for example, Africans were said to be captured by these agents of colonialism and hung upside down, their throats cut so their blood drained into huge buckets. In Kampala, the police were said to abduct Africans and keep them in pits, where their blood was sucked. Luise White presents and interprets vampire stories from East and Central Africa as a way of understanding the world as the storytellers did. Using gossip and rumor as historical sources in their own right, she assesses the place of such evidence, oral and written, in historical reconstruction.

White conducted more than 130 interviews for this book and did research in Kenya, Uganda, and Zambia. In addition to presenting powerful, vivid stories that Africans told to describe colonial power, the book presents an original epistemological inquiry into the nature of historical truth and memory, and into their relationship to the writing of history.

White, Luise (NHC Fellow, 1993–94; 2016–17). Speaking with Vampires: Rumor and History in Colonial Africa. Studies on the History of Society and Culture. Berkeley: University of California Press, 2000.