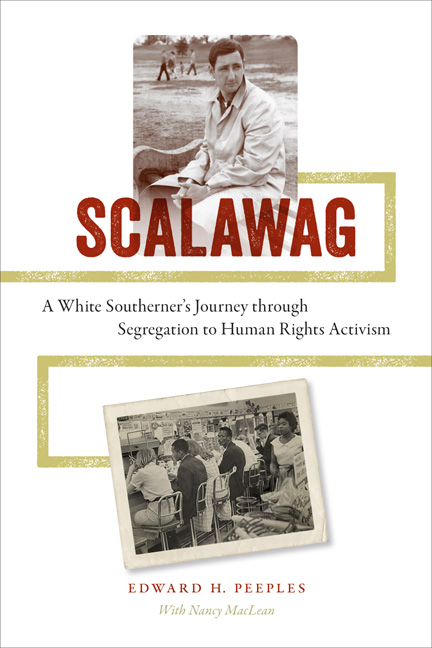 Scalawag tells the surprising story of a white working-class boy who became an unlikely civil rights activist. Born in 1935 in Richmond, where he was sent to segregated churches and schools, Ed Peeples was taught the ethos and lore of white supremacy by every adult in his young life. That message came with an equally cruel one—that, as the child of a wage-earning single mother, he was destined for failure.

But by age nineteen Peeples became what the whites in his world called a "traitor to the race." Pushed by a lone teacher to think critically, Peeples found his way to the black freedom struggle and began a long life of activism. He challenged racism in his U.S. Navy unit and engaged in sit-ins and community organizing. Later, as a university professor, he agitated for good jobs, health care, and decent housing for all, pushed for the creation of African American studies courses at his university, and worked toward equal treatment for women, prison reform, and more. Peeples did most of his human rights work in his native Virginia, and his story reveals how institutional racism pervaded the Upper South as much as the Deep South.

Covering fifty years' participation in the long civil rights movement, Peeples’s gripping story brings to life an unsung activist culture to which countless forgotten individuals contributed, over time expanding their commitment from civil rights to other causes. This engrossing, witty tale of escape from what once seemed certain fate invites readers to reflect on how moral courage can transform a life.