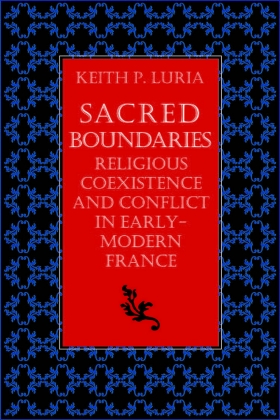 Religious rivalry and persecution have bedeviled so many societies that confessional difference often seems an unavoidable source of conflict. Sacred Boundaries challenges this assumption by examining relations between the Catholic majority and Protestant minority in seventeenth-century France as a case study of two religious groups constructing confessional difference and coexistence. The book studies bi-confessional communities and families, gender roles, confessional polemics, and conversion narratives to discuss topics that include missions, intermarriage, cemetery sharing, women's religious activities, and the meaning of conversion. Its exploration of how the religious groups found ways to live together provides an approach to studying religious rivalry in other times and places.

To explain how confessional groups in this period could be peaceful as well as contentious, the book offers a new conceptualization of three ways Catholics and Protestants constructed the confessional boundary. In the first, their shared concerns for communal harmony and familial interests led them to blur confessional identities. In another, it led them to reach agreements on sharing civic spaces and institutions; such arrangements made their confessional identities clear, but each group maintained an acknowledged place in communities. And in a third form of boundary, the groups were rigidly divided; Protestants were pressured to convert as a way of reintegrating themselves into communities they shared with Catholics. Yet family members and neighbors of the two faiths found ways to overcome even this harshest of confessional boundaries.

Through its examination of confessional identity and the different means of constructing the boundary between religious groups, Sacred Boundaries provides a new understanding of the enduring concerns of religious intolerance and coexistence. And because the study itself crosses boundaries—in the questions it poses, the topics it treats, and the disciplinary approaches it employs—it will interest scholars in history, religion, anthropology, sociology, women's studies, and literary studies.