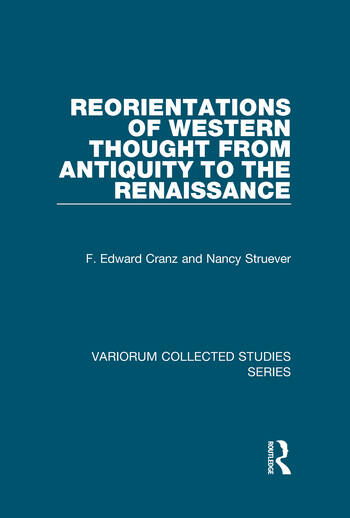 The previous Variorum collection of studies by the late F. Edward Cranz focused specifically on Nicholas of Cusa. The present selection has an equally clear focus, but a far broader scope: it brings together materials on his major thesis, of a fundamental reorientation of the categories of thought in the Latin West, c. 1100 AD, a thesis that dominated his work from the 1960s onwards. The volume differs from the usual Variorum collection in that much of the material is hitherto unpublished, distributed only in 'samizdat' form to Cranz's friends and colleagues. Nancy Struever has collated and edited the versions of these papers, and supplied the necessary annotation for his references. It includes, too, some of the research related to his editions of the Late Antique Aristotelian commentator, Alexander Aphrodisiensis, and his early research on the reception of Classical and early Christian political thought, demonstrating the pertinence of this to the reorientation thesis. Cranz's argument, centering on Anselm's reading of Augustine, and Abelard's of Boethius, but dealing with Renaissance and Reformation figures such as Petrarch and Valla, Cusanus and Luther, Nifo and Zabarella, claims a reorientation in speculative genres of the most basic premises of the relations of mind, language, and reality. Cranz's meticulous close readings of the texts make the case that the reorientation was so deep and thorough as to problematise our modern readings of Hellenic thinkers such as Aristotle, and so radical as to be 'almost invisible' to the Medieval and post-Medieval thinkers. The definitions and distinctions of thematics in this collection are of intrinsic interest, then, to Classical and Late Antique, Medieval, Renaissance, and Early Modern intellectual historians. Indeed, Cranz's work vindicates serious intellectual historical inquiry as indispensable to our understanding of the basic motives and accomplishments of the culture of Pre-Modernity.