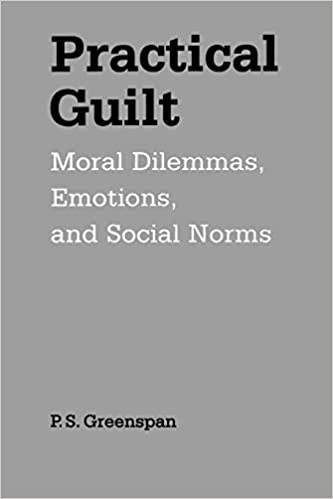 P.S. Greenspan uses the treatment of moral dilemmas as the basis for an alternative view of the structure of ethics and its relation to human psychology. Greenspan argues that dilemmas may be regarded as possible consequences of a set of social rules designed to be simple enough to be teachable. Where these rules prohibit action either way, the problematic motivational force of dilemmas can be explained by reference to the role of emotion as a substitute for action. Guilt is seen as a natural but contested candidate for the sort of emotional sanction for wrongdoing that might supply motivational force in dilemmas. It functions as a way of preserving virtue against moral luck. Greenspan defends guilt in the face of dilemmas on the basis of a "nonjudgmentalist" account of emotions that accepts guilt as appropriate even in some cases of unavoidable wrongdoing. In its treatment of the role of emotion in ethics the argument of the book outlines a new way of packing motivational force into moral meaning that allows for a socially based version of moral realism. Since, on the proposed account, emotions underpin the teaching of moral language, human emotional capacities impose constraints on the nature of a viable moral code and thus affect the content of morality.