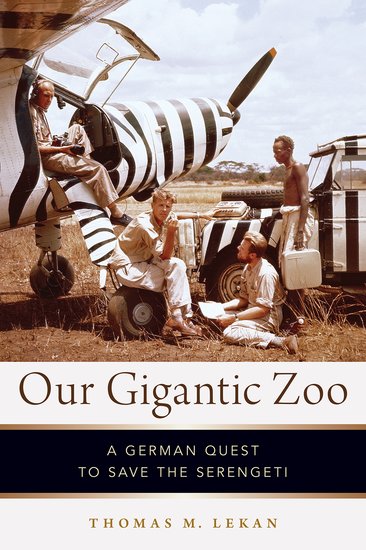 How did the Seregenti become an internationally renowned African conservation site and one of the most iconic destinations for a safari?

In this book, Thomas M. Lekan illuminates the controversial origins of this national park by examining how Europe's greatest wildlife conservationist, former Frankfurt Zoo director and Oscar-winning documentarian Bernhard Grzimek, popularized it as a global destination. In the 1950s, Grimzek and his son Michael began a quest to save the Serengeti from modernization and "overpopulation" by remaking an imperial game reserve into a gigantic zoo for the earth's last great mammals. Grzimek, well-known to German audiences through his long-running television program, A Place for Animals, used the film Seregenti Shall Not Die to convince ordinary Europeans that they could save nature. Yet their message sidestepped the uncomfortable legacies of German colonial exploitation in the region that had endangered animals and excluded local people. After independence, Grzimek raised funds, brokered diplomatic favors, and convinced German tourists to book travel packages--all to persuade Tanzanian leader Julius Nyerere that wildlife would fuel the young nation's economic development. Grzimek helped Tanzania to create almost a dozen new national parks by 1975, but wooing tourists conflicted with rights of the Maasai and other African communities to inhabit the landscape on their own terms. Grzimek's global priorities eventually clashed with Nyerere's nationalist ones, as a more self-assertive Tanzania resented conservationists' meddling and failed promises.

A story that demonstrates the conflicts between international conservation, nature tourism, decolonization, and national sovereignty, Our Gigantic Zoo explores the legacy of the man who portrayed himself as a second Noah, called on a sacred mission to protect the last vestiges of paradise for all humankind.