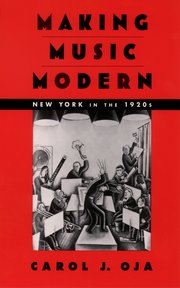 New York City witnessed a dazzling burst of creativity in the 1920s. In this pathbreaking study, Carol J. Oja explores this artistic renaissance from the perspective of composers of classical and modern music, who along with writers, painters, and jazz musicians, were at the heart of early modernism in America. She also illustrates how the aesthetic attitudes and institutional structures from the 1920s left a deep imprint on the arts over the 20th century. Aaron Copland, George Gershwin, Ruth Crawford Seeger, Virgil Thomson, William Grant Still, Edgar Varèse, Henry Cowell, Leo Ornstein, Marion Bauer, George Antheil-these were the leaders of a talented new generation of American composers whose efforts made New York City the center of new music in the country. They founded composer societies--such as the International Composers' Guild, the League of Composers, the Pan American Association, and the Copland-Sessions Concerts--to promote the performance of their music, and they nimbly negotiated cultural boundaries, aiming for recognition in Western Europe as much as at home. They showed exceptional skill at marketing their work. Drawing on extensive archival material--including interviews, correspondence, popular periodicals, and little-known music manuscripts--Oja provides a new perspective on the period and a compelling collective portrait of the figures, puncturing many longstanding myths. American composers active in New York during the 1920s are explored in relation to the "Machine Age" and American Dada; the impact of spirituality on American dissonance; the crucial, behind-the-scenes role of women as patrons and promoters of modernist music; cross-currents between jazz and concert music; the critical reception of modernist music (especially in the writings of Carl Van Vechten and Paul Rosenfeld); and the international impulse behind neoclassicism. The book also examines the persistent biases of the time, particularly anti-Semitisim, gender stereotyping, and longstanding racial attitudes.