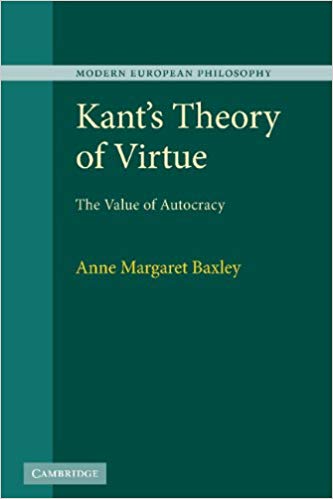 Anne Margaret Baxley offers a systematic interpretation of Kant's theory of virtue, whose most distinctive features have not been properly understood. She explores the rich moral psychology in Kant's later and less widely read works on ethics, and argues that the key to understanding his account of virtue is the concept of autocracy, a form of moral self-government in which reason rules over sensibility. Although certain aspects of Kant's theory bear comparison to more familiar Aristotelian claims about virtue, Baxley contends that its most important aspects combine to produce something different – a distinctively modern, egalitarian conception of virtue which is an important and overlooked alternative to the more traditional Greek views which have dominated contemporary virtue ethics.