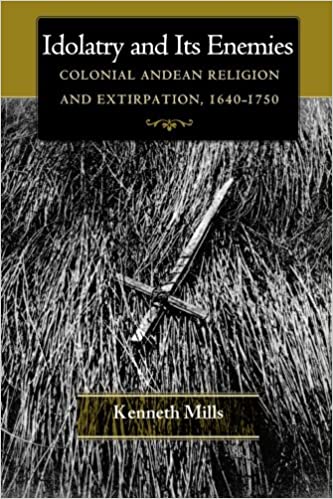 The ecclesiastical investigations into Indian religious error — the Extirpation of idolatry — that occurred in the seventeenth-and eighteenth-century Archdiocese of Lima come to life here as the most revealing sources on colonial Andean religion and culture. Focusing on a largely neglected period, 1640 to 1750, and moving beyond portrayals that often view the relationships between indigenous peoples and Europeans solely in terms of repression, opposition, or accommodation, Kenneth Mills provides a wealth of new material and interpretation for understanding native Andeans and Spanish Christians as participants in a common, if not harmonious, history. By examining colonial interaction and “religion as lived,” he introduces memorable native Andean and Spanish actors and finds vivid points of entry into the complex realities of parish life in the mid-colonial Andes.

Mills describes fitful, sometimes unintentional, and often ambiguous kinds of religious change among Andeans. He shows that many of the Quechua speakers whose testimonies form the bulk of the archival evidence were simultaneously active Catholic parishioners and adherents to a complex of transforming Andean religious structures. Mills also explores the notions of reformation and correction that fueled the extirpating process in the central Andes, as elsewhere. Moreover, he demonstrates wide differences of opinion among Spanish churchmen as to the best manner to proceed against the suspect religiosity of baptized Andeans — many of whom considered themselves Christians. In so doing, he connects this religious history to experiences in other regions of colonial Spanish America and to wider relations between Christian and non-Christian peoples.