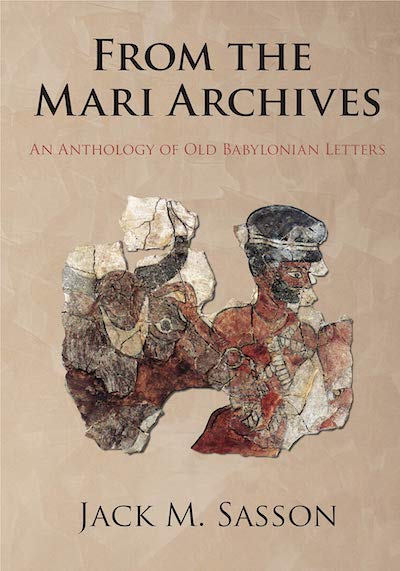 For over 40 years, Jack M. Sasson has been studying and commenting on the cuneiform archives from Mari on the Euphrates River, especially those from the age of Hammurabi of Babylon. Among Mari’s wealth of documents, some of the most interesting are letters from and to kings, their advisers and functionaries, their wives and daughters, their scribes and messengers, and a variety of military personnel. The letters are revealing and often poignant. Sasson selects more than 700 letters as well as several excerpts from administrative documents, translating them and providing them with illuminating comments. In distilling a lifetime of study and interpretation, Sasson hopes to welcome readers into a fuller appreciation of a remarkable period in Mesopotamian civilization.

Sasson’s presentation is organized around major institutions in an ancient culture: (1) Kingship, treating accumulation of wealth, control of vassals, dynastic marriages, treaty-obligations, as well as illustrating the hazards and vexation of ruling a large territory; (2) Administration, from palaces that teem with bureaucrats, musicians, and cooks, to the management of provinces and vassal kingdoms; (3) Warfare, military establishment and martial practices; (4) Society, including organs of justice (and shortcuts to it), crime, punishment, and civil transactions; (5) Religion, including notices on diverse pantheons, rituals, priesthood, cultic paraphernalia, vows, ordeals, and channels to the gods (divination, dreams, and prophecy); and (6) Culture, including ethnic distinctions, class structure, and moments in the life cycle (birth, childhood, family life, health matters, death, and commemoration).

Sasson’s presentation of the material brings to life a world entombed for four millennia, concretizes the realities of ancient life, and gives it a human perspective that is at once instructive and entertaining.

The book is accompanied by extensive concordances and indexes (including to biblical passages) that will be useful to those who wish to study the letters more intensively.