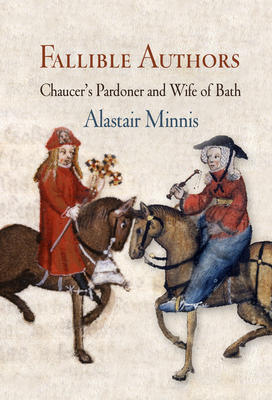 Can an outrageously immoral man or a scandalous woman teach morality or lead people to virtue? Does personal fallibility devalue one's words and deeds? Is it possible to separate the private from the public, to segregate individual failing from official function? Chaucer addressed these perennial issues through two problematic authority figures, the Pardoner and the Wife of Bath. The Pardoner dares to assume official roles to which he has no legal claim and for which he is quite unsuited. We are faced with the shocking consequences of the belief, standard for the time, that immorality is not necessarily a bar to effective ministry. Even more subversively, the Wife of Bath, who represents one of the most despised stereotypes in medieval literature, the sexually rapacious widow, dispenses wisdom of the highest order.

This innovative book places these "fallible authors" within the full intellectual context that gave them meaning. Alastair Minnis magisterially examines the impact of Aristotelian thought on preaching theory, the controversial practice of granting indulgences, religious and medical categorizations of deviant bodies, theological attempts to rationalize sex within marriage, Wycliffite doctrine that made authority dependent on individual grace and raised the specter of Donatism, and heretical speculation concerning the possibility of female teachers. Chaucer's Pardoner and Wife of Bath are revealed as interconnected aspects of a single radical experiment wherein the relationship between objective authority and subjective fallibility is confronted as never before.