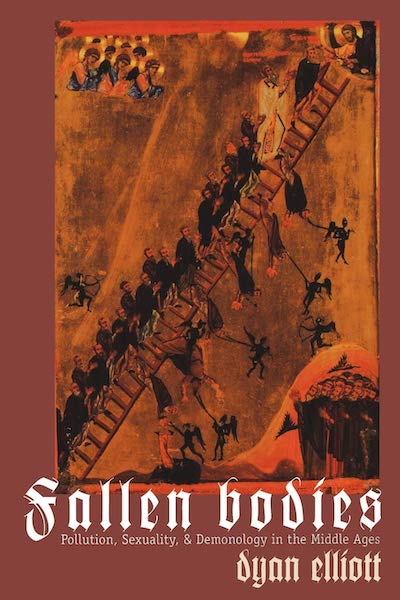 Medieval clerics believed that original sin had rendered their "fallen bodies" vulnerable to corrupting impulses—particularly those of a sexual nature. They feared that their corporeal frailty left them susceptible to demonic forces bent on penetrating and polluting their bodies and souls.

Drawing on a variety of canonical and other sources, Fallen Bodies examines a wide-ranging set of issues generated by fears of pollution, sexuality, and demonology. To maintain their purity, celibate clerics combated the stain of nocturnal emissions; married clerics expelled their wives onto the streets and out of the historical record; an exemplum depicting a married couple having sex in church was told and retold; and the specter of the demonic lover further stigmatized women's sexuality. Over time, the clergy's conceptions of womanhood became radically polarized: the Virgin Mary was accorded ever greater honor, while real, corporeal women were progressively denigrated. When church doctrine definitively denied the physicality of demons, the female body remained as the prime material presence of sin.

Dyan Elliott contends that the Western clergy's efforts to contain sexual instincts—and often the very thought and image of woman—precipitated uncanny returns of the repressed. She shows how this dynamic ultimately resulted in the progressive conflation of the female and the demonic, setting the stage for the future persecution of witches.