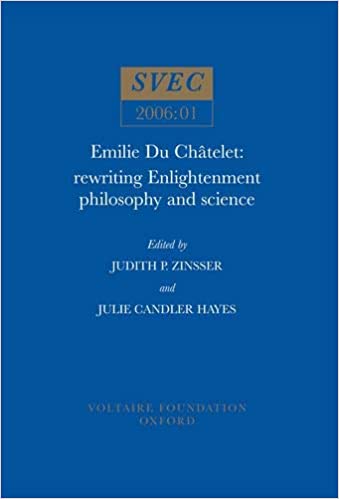 Until recently, the marquise Du Châtelet (1706-1749) was more remembered as the companion of Voltaire than as an intellectual in her own right. While much has been written about his extraordinary output during the years he spent in her company, her own work has often been overshadowed. This volume brings renewed attention to Du Châtelet's intellectual achievements, including her free translation of selections from Bernard Mandeville's Fable of the bees; her dissertation on the nature and propagation of fire for the 1738 prize competition of the Académie des sciences; the 1740 Institutions de physique and ensuing exchange with the perpetual secretary of the Académie, Dortous de Mairan; her two-volume exegesis of the Bible; the translation of and commentary on Isaac Newton's Principia; and her semi-autobiographical Discours sur le bonheur. It is a measure of the breadth of her interests that the contributions to this volume come from experts in a wide range of disciplines: comparative literature, art history, the history of mathematics and science, philosophy, the history of publishing and translation studies. Du Châtelet's partnership with Voltaire is reflected in a number of the essays; they borrowed from each other's writings, from the discussions they had together, and from their shared readings. Essays examine representations of her by her contemporaries and posterity that range from her inclusion in a German portrait gallery of learned men and women, to the scathing portrait in Françoise de Graffigny's correspondence, and nineteenth-century accounts coloured by conflicted views of the ancien régime. Other essays offer close readings of her work, and set her activities and writings in their intellectual and social contexts. Finally, they speculate on the ways in which she presented herself and what that might tell us about the challenges and possibilities facing an exceptional woman of rank and privilege in eighteenth-century society.