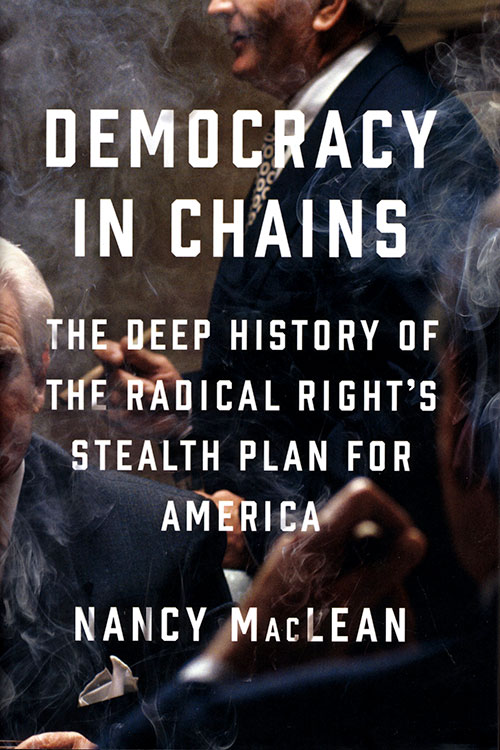 Behind today’s headlines of billionaires taking over our government is a secretive political establishment with long, deep, and troubling roots. The capitalist radical right has been working not simply to change who rules, but to fundamentally alter the rules of democratic governance. But billionaires did not launch this movement; a white intellectual in the embattled Jim Crow South did. Democracy in Chains names its true architect—the Nobel Prize-winning political economist James McGill Buchanan—and dissects the operation he and his colleagues designed over six decades to alter every branch of government to disempower the majority.

In a brilliant and engrossing narrative, Nancy MacLean shows how Buchanan forged his ideas about government in a last gasp attempt to preserve the white elite’s power in the wake of Brown v. Board of Education. In response to the widening of American democracy, he developed a brilliant, if diabolical, plan to undermine the ability of the majority to use its numbers to level the playing field between the rich and powerful and the rest of us.

Corporate donors and their right-wing foundations were only too eager to support Buchanan’s work in teaching others how to divide America into “makers” and “takers.” And when a multibillionaire on a messianic mission to rewrite the social contract of the modern world, Charles Koch, discovered Buchanan, he created a vast, relentless, and multi-armed machine to carry out Buchanan’s strategy.

Without Buchanan’s ideas and Koch’s money, the libertarian right would not have succeeded in its stealth takeover of the Republican Party as a delivery mechanism. Now, with Mike Pence as Vice President, the cause has a longtime loyalist in the White House, not to mention a phalanx of Republicans in the House, the Senate, a majority of state governments, and the courts, all carrying out the plan. That plan includes harsher laws to undermine unions, privatizing everything from schools to health care and Social Security, and keeping as many of us as possible from voting. Based on ten years of unique research, Democracy in Chains tells a chilling story of right-wing academics and big money run amok. This revelatory work of scholarship is also a call to arms to protect the achievements of twentieth-century American self-government.