Commerce with the Universe: Africa, India, and the Afrasian Imagination - National Humanities Center 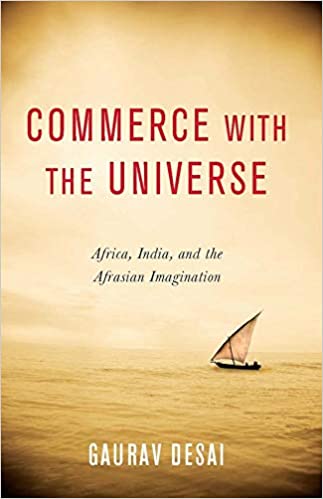 Reading the life narratives and literary texts of South Asians writing in and about East Africa, Gaurav Desai builds a surprising, alternative history of Africa's experience with slavery, migration, colonialism, nationalism, and globalization. Consulting Afrasian texts that are literary and nonfictional, political and private, he broadens the scope of African and South Asian scholarship and inspires a more nuanced understanding of the Indian Ocean's fertile routes of exchange.

Desai shows how the Indian Ocean engendered a number of syncretic identities and shaped the medieval trade routes of the Islamicate empire, the early independence movements galvanized in part by Gandhi's southern African experiences, the invention of new ethnic nationalisms, and the rise of plural, multiethnic African nations. Calling attention to lives and literatures long neglected by traditional scholars, Desai introduces rich, interdisciplinary ways of thinking not only about this specific region but also about the very nature of ethnic history and identity. Traveling from the twelfth century to today, he concludes with a look at contemporary Asian populations in East Africa and their struggle to decide how best to participate in the development and modernization of their postcolonial nations without sacrificing their political autonomy.