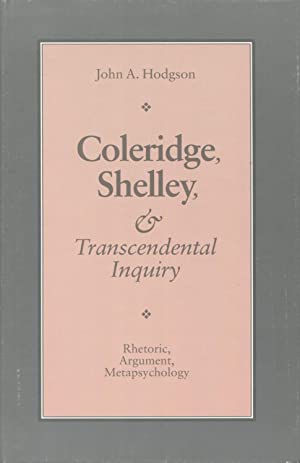 The English Romantic writers and poets valued a genuine coherence of image and idea. Striving for organic form, they were faced with the challenge of using figuration - metaphor, metonymy, synecdoche - to represent the essentially unrepresentable: God, ultimate power, the human mind and psyche, what Shelley called "the Deep Truth". More insistently than earlier writers, but in ways often veiled, the Romantics contributed to the rhetorical analysis of discourse. Now John A. Hodgson advances a theory of how the Romantics matched rhetoric to argument in their approaches to the transcendent. Hodgson begins with Samuel Coleridge, who demonstrates the relevance of rhetorical analysis to philosophical no less than to literary inquiry. Moving to Percy Shelley, whose "Defense of Poetry" celebrates the transcendental, he shows how that poet's different argument involves a rhetorical stance with different psychological implications. The discussion extends to Edmund Burke and Sigmund Freud, who supply a vocabulary and schema for distinguishing the modes of transcendental argument. Coleridge, Shelley, and Transcendental Inquiry offers new insights into English Romantic poetry and Freud's metapsychology - most notably in its analysis of Coleridge's theory of figuration, Shelley's rhetorical self-destructiveness, and Freud's ambivalent poise between poetry and philosophy. Reaching beyond Romanticism and beyond Freud, the book ends by integrating contemporary rhetorical, deconstructionist, and psychological approaches to literary theory.