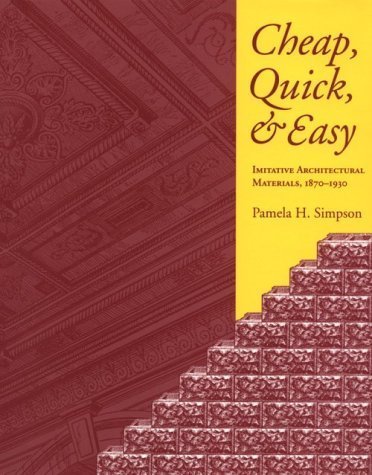 In this innovative study, Pamela H. Simpson examines the architectural materials that proliferated between 1870 and 1930. Produced by new technology, promoted by new forms of advertising, and eagerly adopted by a new middle class, these “cheap, quick, and easy” materials helped to transform building practices in the United States and Great Britain.

As Simpson shows in fascinating detail, rockface concrete blocks, pressed metal imitations of stone, linoleum “marble” and “parquet,” and embossed wall coverings made available to the masses a host of ornamental effects that only the wealthy could previously have afforded. But, she notes, wherever these new materials appeared, a heated debate over the appropriateness of imitation followed. Were these materials merely tasteless shams? Or were they economical, durable alternatives that democratically extended the possibilities of ornamentation?

Simpson devotes chapters to each of the various ornamental materials, considering its precursors, invention, production, and distribution. In her final chapter, she traces the history of the aesthetic debate over imitation and analyzes the social meaning of the materials. Far from being “bad taste,” she concludes, these new ornamental forms reflected modernism, democracy, and progress—some of the most deeply held values of the period.