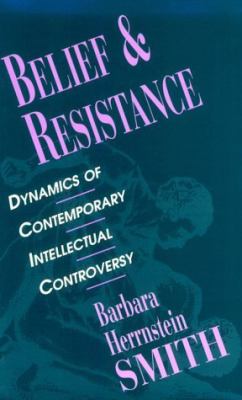 Truth, reason, and objectivity—can we survive without them? What happens to law, science, and the pursuit of social justice when such ideas and ideals are rejected? These questions are at the heart of the controversies between traditionalists and “postmodernists” that Barbara Herrnstein Smith examines in her wide-ranging book, which also offers an original perspective on the perennial—perhaps eternal—clash of belief and skepticism, on our need for intellectual stability and our experience of its inevitable disruption.

Focusing on the mutually frustrating impasses to which these controversies often lead and on the charges—“absurdity,” “irrationalism,” “complicity,” “blindness,” “stubbornness”—that typically accompany them, Smith stresses our tendency to give self-flattering reasons for our own beliefs and to discount or demonize the motives of those who disagree with us. Her account of the resulting cognitive and rhetorical dynamics of intellectual conflict draws on recent research and theory in evolutionary biology, neuroscience, developmental psychology, and the history and sociology of science, as well as on contemporary philosophy and language theory.

Smith’s analyses take her into important ongoing debates over the possibility of an objective grounding of legal and political judgments, the continuing value of Enlightenment rationalism, significant challenges to dominant ideas of scientific truth, and proper responses to denials of the factuality of the Holocaust. As she explores these and other controversies, Smith develops fresh ways to understand their motives and energies, and more positive ways to see the operations of intellectual conflict more generally.