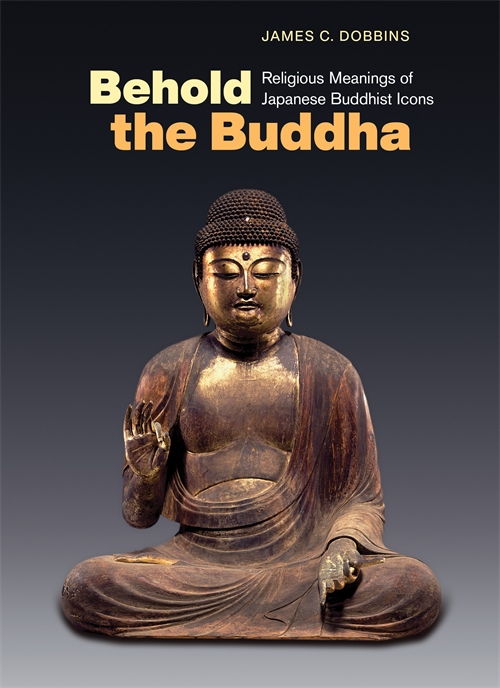 "Images of the Buddha are everywhere—not just in temples but also in museums and homes and online—but what these images mean largely depends on the background and circumstance of those viewing them. In Behold the Buddha, James Dobbins invites readers to imagine how premodern Japanese Buddhists understood and experienced icons in temple settings long before the advent of museums and the internet. Although widely portrayed in the last century as visual emblems of great religious truths or as exquisite works of Asian art, Buddhist images were traditionally treated as the very embodiment of the Buddha, his palpable presence among people. Hence, Buddhists approached them as living entities in their own right—that is, as awakened icons with whom they could interact religiously.

Dobbins begins by reflecting on art museums, where many non-Buddhists first encounter images of the Buddha, before outlining the complex Western response to them in previous centuries. He next elucidates images as visual representations of the story of the Buddha’s life followed by an overview of the physical attributes and symbolic gestures found in Buddhist iconography. A variety of Buddhas, Bodhisattvas, and other divinities commonly depicted in Japanese Buddhism is introduced, and their 'living' quality discussed in the context of traditional temples and Buddhist rituals. Finally, other religious objects in Japanese Buddhism—relics, scriptures, inscriptions, portraits of masters, and sacred sites—are explained using the Buddhist icon as a model. Dobbins concludes by contemplating art museums further as potential sites for discerning the religious character of Buddhist images.

Those interested in Buddhism generally who would like to learn more about its rich iconography—whether encountered in temples or museums—will find much in this concise, well-illustrated volume to help them 'behold the Buddha.'"