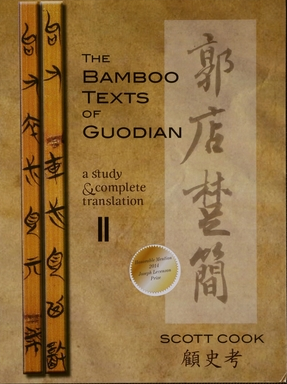 The cache of bamboo texts unearthed in the village of Guodian, Hubei Province, in 1993 is a rare and unique find in the history of Chinese philosophy and literature. This study renders the complex corpus of the Guodian texts into a more easily manageable form, incorporating the past several years of scholarly activity on these texts and providing them with a comprehensive introduction along with a complete and well-annotated translation into English. As the only archaeologically excavated corpus of philosophical manuscripts to emerge from a Warring States–period tomb, the Guodian texts provide us with a wealth of reliable information for gaining new insights into the textual and intellectual history of pre-imperial China. Given the prominence of Confucian works in the corpus, they serve to fill out much of the intellectual historical picture for the doctrines of roughly three generations of Confucian disciples who fell between the times of Confucius (551–479 BC) and Mencius (c. 390–305 BC). The manuscripts also hold great significance for the study of early Chinese paleography and phonology. Volume I contains a general introduction to the Guodian tomb, the manuscript contents, and a discussion of the various problems of reading and interpretation that the manuscripts involve, along with their place within the larger context of early Chinese intellectual history. It also contains introductions to and annotated translations of the "Laozi" and "Taiyi sheng shui" manuscripts, along with those of "Ziyi," "Lu Mu Gongwen Zisi," "Qiongda yi shi," "Wu xing," "Tang Yu zhidao,"and "Zhongxin zhi dao."