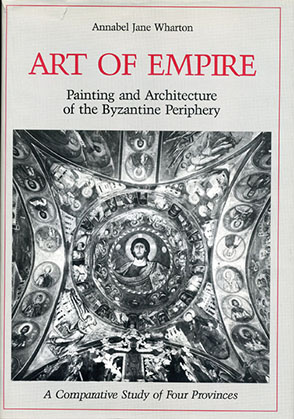 Between the ninth and twelfth centuries the Byzantine Empire encompassed a wide geographical territory extending from South Italy to Armenia, from the Danube to Cyprus. From the capital of the Empire, Constantinople, the all-powerful, God-elected emperor exercised autocratic control over the periphery. These structures of centralization stood in tension with the decentralizing force of local interests in the provinces. This present volume offers a comparative study of the form and patronage of surviving buildings and their painted decoration in four very different provinces— Cappadocia, Cyprus, Macedonia, and South Italy—as a means of assessing the nature of Byzantine provincial art. All too often art historians have simplistically labeled high quality works in the provinces “metropolitan” and those of lesser aesthetic interests “provincial.” The study establishes that a context in the hinterlands of the Empire affected the making of all provincial buildings—great and small. Local traditions and distinct patterns of patronage left their mark on even the most cosmopolitan structures. At the same time, the relative receptivity of the provinces to metropolitan artistic conventions indicates the ideological power of those conventions. Monumental works constructed in the provinces consistently served to reinforce Constantinopolitan hegemony. The reciprocity of these actions in the art of the Empire calls into question the facile equation of “provincial” with poor quality, derivativeness, and artistic insignificance. Most of the great fresco programs and buildings of the Byzantine Empire survive not in its capital, Constantinople, but in its provinces. Art of Empire is the only study to date which treats both the painting and architecture of these monuments comparatively within their geographical and social context. Though not a survey of provincial monuments, the book makes accessible to a broader audience a compendium of little-known and underappreciated works of great aesthetic and historical value.