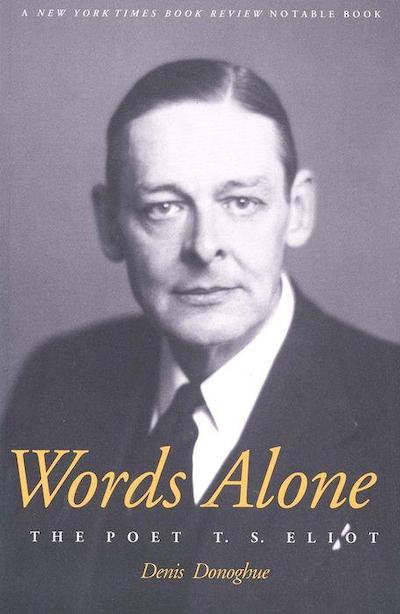 When Denis Donoghue left Warrenpoint and went to Dublin in September 1946, he entered University College as a student of Latin and English. A few months later he also started as a student of lieder at the Royal Irish Academy of Music. These studies have informed his reading of English, Irish, and American literature.

Now in this volume, one of our most distinguished readers of modern literature offers his most personal book of literary criticism. Donoghue’s Words Alone is an intellectual memoir, a lucid and illuminating account of his engagement with the works of T. S. Eliot—from initial undergraduate encounters with “The Love Song of J. Alfred Prufrock” to later submission to Eliot’s entire writings. “The pleasure of Eliot’s words persists,” Donoghue says, “only because in good faith it can’t be denied.”

Submission to Eliot, in Donoghue’s case, involves the ear as much as it does the mind. He is a reader who listens attentively and a writer whose own music in these pages commands attention. Whether he is writing about Eliot’s poetry or confronting the (often contentious) prose, Donoghue eloquently demonstrates what it means to read and to hear a master of language.