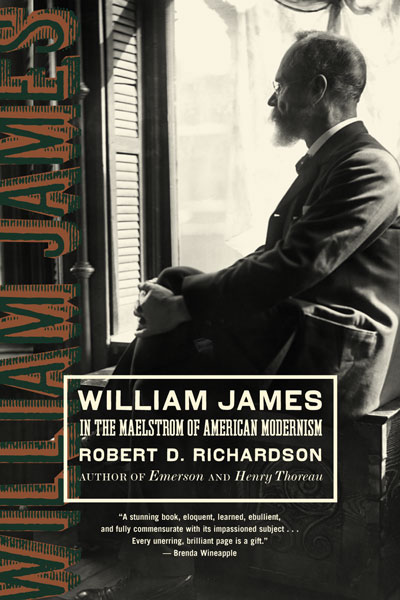 The definitive biography of the fascinating William James, whose life and writing put an indelible stamp on psychology, philosophy, teaching, and religion -- on modernism itselfPivotal member of the Metaphysical Club, author of The Varieties of Religious Experience, eldest sibling in the extraordinary James family, William emerges here as an immensely complex and curious man.William James, ten years in the making, draws on a vast number of unpublished letters, journals, and family records to illuminate what James himself called the "buzzing blooming confusion" of his life. Richardson shows James struggling to achieve amid the domestic chaos and intellectual brilliance of his father, his brother Henry, and his sister Alice. There are portraits of James's early years as a student at the appallingly hidebound Harvard of the 1860s. And there are the harrowing suicidal episodes, after which James, still a young man, turns from depression to action with "a heave of will." Through impassioned scholarship, Richardson illuminates James's hugely influential works: the Varieties, Principles of Psychology, Talks to Teachers, and Pragmatism.As a longtime professor James taught courage and risk-taking. He was W.E.B. Du Bois's adviser and teacher, and he told another of his students, Gertrude Stein, to reject nothing -- that rejecting anything was the beginning of the end for an intellectual. One of the great figures in mysticism, James coined the phrase "stream of consciousness."