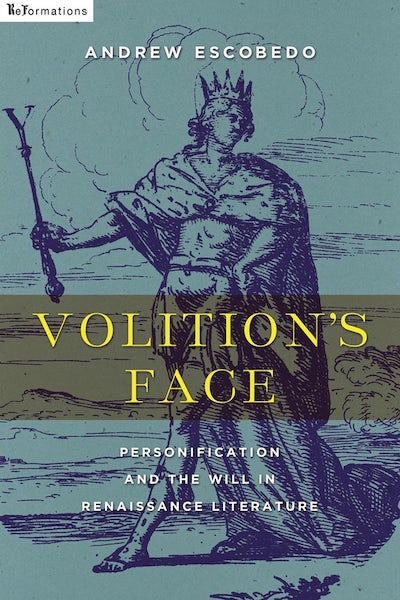 Modern readers and writers find it natural to contrast the agency of realistic fictional characters to the constrained range of action typical of literary personifications. Yet no commentator before the eighteenth century suggests that prosopopoeia signals a form of reduced agency. Andrew Escobedo argues that premodern writers, including Spenser, Marlowe, and Milton, understood personification as a literary expression of will, an essentially energetic figure that depicted passion or concept transforming into action. As the will emerged as an isolatable faculty in the Christian Middle Ages, it was seen not only as the instrument of human agency but also as perversely independent of other human capacities, for example, intellect and moral character. Renaissance accounts of the will conceived of volition both as the means to self-creation and the faculty by which we lose control of ourselves. After offering a brief history of the will that isolates the distinctive features of the faculty in medieval and Renaissance thought, Escobedo makes his case through an examination of several personified figures in Renaissance literature: Conscience in the Tudor interludes, Despair in Doctor Faustus and book I of The Faerie Queen, Love in books III and IV of The Faerie Queen, and Sin in Paradise Lost. These examples demonstrate that literary personification did not amount to a dim reflection of “realistic” fictional character, but rather that it provided a literary means to explore the numerous conundrums posed by the premodern notion of the human will. This book will be of great interest to faculty and graduate students interested in medieval studies and Renaissance literature.