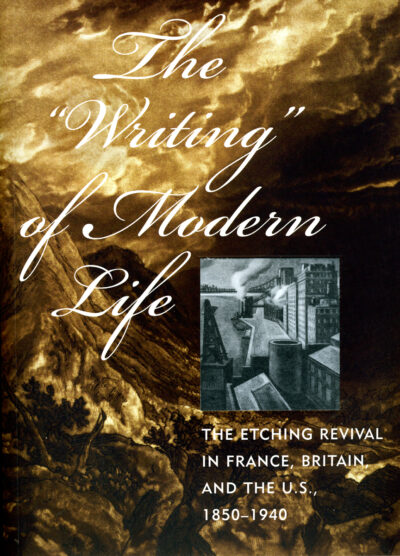 What is it about etching that renders it—according to both the poet-critic Charles Baudelaire and the visionary artist Samuel Palmer—a medium of writing? And, moreover, what makes etching equally adaptable to the expression of both memory and modernity? The “Writing” of Modern Life examines British, French, and American artists who from the polemical beginnings of the Etching Revival in the 1850s to its twentieth-century afterlife practiced etching as a form of quasi-literary authorship. Whether or not these printmakers viewed etching as a medium for expressing thoughts or personality, as Baudelaire and Palmer claimed, they did find in the craft a way to suggest both elegiac recollection and the visual strangeness of modern life.

Containing essays by Martha Tedeschi, Peyton Skipwith, Anna Arnar, Allison Morehead, and Elizabeth Helsinger, and generously illustrated with works by both well-known and less-heralded printmakers, The “Writing” of Modern Life is an interdisciplinary collection that will appeal to literary and art historians alike.