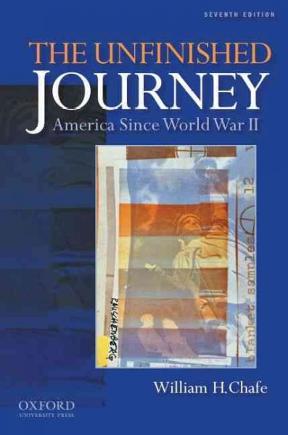 This popular and classic text chronicles America's roller-coaster journey through the decades since World War II. Considering both the paradoxes and the possibilities of postwar America, William H. Chafe portrays the significant cultural and political themes that have colored our country's past and present, including issues of race, class, gender, foreign policy, and economic and social reform. He examines such subjects as the Vietnam War, the civil rights movement, the origins and the end of the Cold War, the culture of the 1970s, the rise of the New Right, the events of September 11th and their aftermath, and various presidencies.

Now thoroughly revised and updated, the seventh edition of The Unfinished Journey combines and reorganizes several chapters. The former Chapter 14, "New Rules, Old Realities," is now divided into two chapters. The new Chapter 14, "An Era of Political Malaise," covers the political history of the 1970s. It is followed by Chapter 15, "A Divided Culture, A Divided Society," which assesses the shifting cultural landscape of the 1970s and the emergence of major fissures in the social system of the nation. The final chapter contains substantial new material on the administration of George W. Bush, the wars in Iraq and Afghanistan, the election of 2008, and the first year of Barack Obama's presidency. Brilliantly written by a prize-winning historian, The Unfinished Journey, Seventh Edition, is an essential text for all students of recent American history.