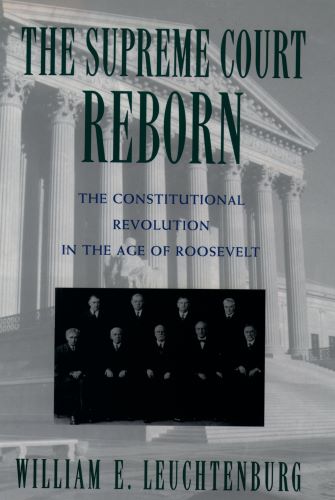 For almost sixty years, the results of the New Deal have been an accepted part of political life. Social Security, to take one example, is now seen as every American's birthright. But to validate this revolutionary legislation, Franklin Roosevelt had to fight a ferocious battle against the opposition of the Supreme Court--which was entrenched in laissez faire orthodoxy. After many lost battles, Roosevelt won his war with the Court, launching a Constitutional revolution that went far beyond anything he envisioned.

In The Supreme Court Reborn, esteemed scholar William E. Leuchtenburg explores the critical episodes of the legal revolution that created the Court we know today. Leuchtenburg deftly portrays the events leading up to Roosevelt's showdown with the Supreme Court. Committed to laissez faire doctrine, the conservative "Four Horsemen"--Justices Butler, Van Devanter, Sutherland, and McReynolds, aided by the swing vote of Justice Owen Roberts--struck down one regulatory law after another, outraging Roosevelt and much of the Depression-stricken nation. Leuchtenburg demonstrates that Roosevelt thought he had the backing of the country as he prepared a scheme to undermine the Four Hoursemen. Famous (or infamous) as the "Court-packing plan," this proposal would have allowed the president to add one new justice for every sitting justice over the age of seventy. The plan picked up considerable momentum in Congress; it was only after a change in the voting of Justice Roberts (called "the switch in time that saved nine") and the death of Senate Majority Leader Joseph T. Robinson that it shuddered to a halt. Rosevelt's persistence led to one of his biggest legislative defeats. Despite the failure of the Court-packing plan, however, the president won his battle with the Supreme Court; one by one, the Four Horsemen left the bench, to be replaced by Roosevelt appointees. Leuchtenburg explores the far-reaching nature of FDR's victory. As a consequence of the Constitutional Revolution that began in 1937, not only was the New Deal upheld (as precedent after precedent was overturned), but also the Court began a dramatic expansion of Civil liberties that would culminate in the Warren Court. Among the surprises was Senator Hugo Black, who faced widespread opposition for his lack of qualifications when he was appointed as associate justice; shortly afterward, a reporter revealed that he had been a member of the Ku Klux Klan. Despite that background, Black became an articulate spokesman for individual liberty.

William E. Leuchtenburg is one of America's premier historians, a scholar who combines depth of learning with a graceful style. This superbly crafted book sheds new light on the great Constitutional crisis of our century, illuminating the legal and political battles that created today's Supreme Court.