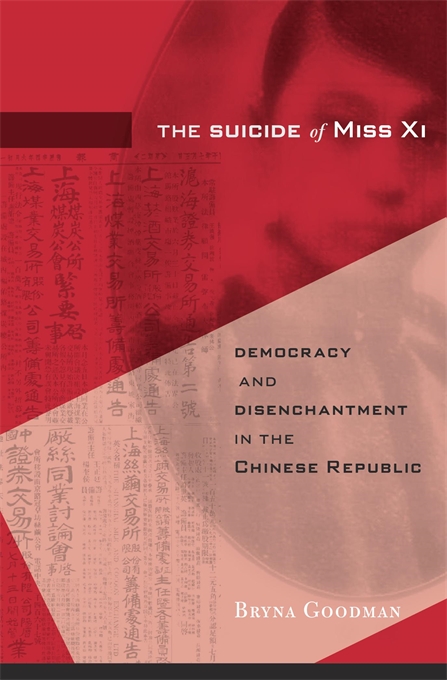 On September 8, 1922, the body of Xi Shangzhen was found hanging in the Shanghai newspaper office where she worked. Although her death occurred outside of Chinese jurisdiction, her U.S.-educated employer, Tang Jiezhi, was kidnapped by Chinese authorities and put on trial. In the unfolding scandal, novelists, filmmakers, suffragists, reformers, and even a founding member of the Chinese Communist Party seized upon the case as emblematic of deep social problems. Xi’s family claimed that Tang had pressured her to be his concubine; his conviction instead for financial fraud only stirred further controversy.

The creation of a republic ten years earlier had inspired a vision of popular sovereignty and citizenship premised upon gender equality and legal reform. After the quick suppression of the first Chinese parliament, commercial circles took up the banner of democracy in their pursuit of wealth. But, Bryna Goodman shows, the suicide of an educated “new woman” exposed the emptiness of republican democracy after a flash of speculative finance gripped the city. In the shadow of economic crisis, Tang’s trial also exposed the frailty of legal mechanisms in a political landscape fragmented by warlords and enclaves of foreign colonial rule.

The Suicide of Miss Xi opens a window onto how urban Chinese in the early twentieth century navigated China’s early passage through democratic populism, in an ill-fated moment of possibility between empire and party dictatorship. Xi Shangzhen became a symbol of the failures of the Chinese Republic as well as the broken promises of citizen’s rights, gender equality, and financial prosperity betokened by liberal democracy and capitalism.