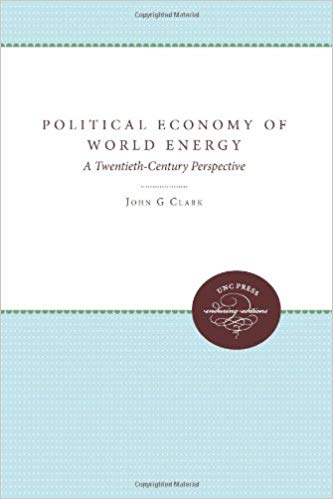 The Political Economy of World Energy is an authoritative and wide-ranging study of the role of energy in the twentieth-century world economy. Expanding on his previous work on U.S. energy policy, John Clark reviews and analyzes political, institutional, social, and economic factors affecting world energy supplies and use from 1900 to 1980. Although oil now commands the major share of the world trade in energy, Clark also examines trade in coal, natural gas, and atomic energy. He explores not only policies and events in key energy-producing nations but also efforts of less-developed countries and non-energy-producing nations to become producers or to otherwise profit from or control the processing of raw fuels.

Clark describes the constantly changing relationships between such leading industrial nations as the United States, Japan, and members of the European Community and such important energy producers as the U.S.S.R., Mexico, Venezuela, and the Persian Gulf states. After World War I, international trade in coal declined and that in oil and natural gas increased. Powerful multinational firms came to dominate the energy industry. As the United States, Japan, and Western Europe became increasingly dependent upon oil imports, producer nations attempted to manipulate resources for political gain. The oil price hikes of the 1970s plagued national economies, forcing some modification of the mix of energy resources and focusing somewhat greater attention on conservation and renewable energy sources.

Modern energy systems were fundamental to urbanization, industrialization, and attendant sociopolitical changes throughout this century. Although the industrialized societies have not been entirely successful in controlling nuclear power and other new energy technologies, they have actively promoted their imperfect energy systems to poorer nations who lack technological expertise. Little attention has been devoted by either the capitalist economies or the command economies of the old Soviet bloc to the environmental effects of burning fossil fuels. For these and other reasons, Clark gives the leading capitalist and command economies low marks in energy management.