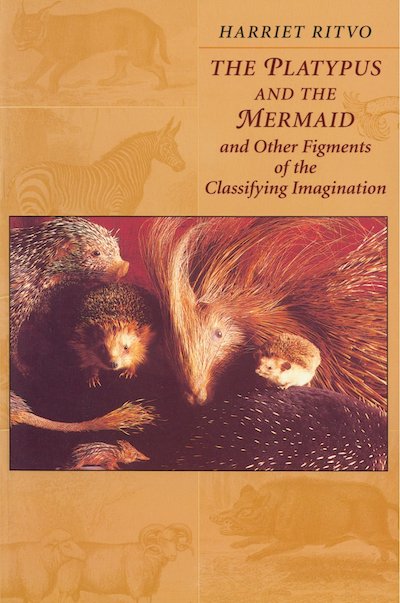 “Cats is ‘dogs,’ and rabbits is ‘dogs,’ and so’s parrots; but this ’ere ‘tortis’ is a insect,” a porter explains to an astonished traveler in a nineteenth-century Punch cartoon. Railways were not the only British institution to schematize the world. This enormously entertaining book captures the fervor of the Victorian age for classifying and categorizing every new specimen, plant or animal, that British explorers and soldiers and sailors brought home. As she depicts a whole complex of competing groups deploying rival schemes and nomenclatures, Harriet Ritvo shows us a society drawing and redrawing its own boundaries and ultimately identifying itself.

The experts (whether calling themselves naturalists, zoologists, or comparative anatomists) agreed on their superior authority if nothing else, but the laymen had their say—and Ritvo shows us a world in which butchers and artists, farmers and showmen vied to impose order on the wild profusion of nature. Sometimes assumptions or preoccupations overlapped; sometimes open disagreement or hostility emerged, exposing fissures in the social fabric or contested cultural territory. Of the greatest interest were creatures that confounded or crossed established categories; in the discussions provoked by these mishaps, monstrosities, and hybrids we can see ideas about human society—about the sexual proclivities of women, for instance, or the imagined hierarchy of nations and races.

A thoroughly absorbing account of taxonomy—as zoological classification and as anthropological study—The Platypus and the Mermaid offers a new perspective on the constantly shifting, ever suggestive interactions of scientific lore, cultural ideas, and the popular imagination.