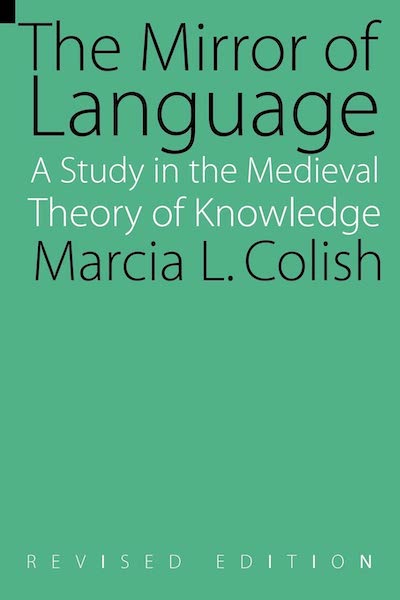 Early Christianity faced the problem of the human word versus Christ the Word. Could language accurately describe spiritual reality? The Mirror of Language brilliantly traces the development of one prominent theory of signs from Augustine through Anselm of Canterbury, Thomas Aquinas, and Dante. Their shared epistemology validated human language as an authentic but limited index of preexistent reality, both material and spiritual. This sign theory could thereby account for the ways men receive, know, and transmit religious knowledge, always mediated through faith.

Marcia L. Colish demonstrates how the three theologians used different branches of the medieval trivium to express a common sign theory: Augustine stressed rhetoric, Anselm shifted to grammar (including grammatical proofs of God's existence), and Thomas Aquinas stressed dialectic. Dante, the one poet included in this study, used the Augustinian sign theory to develop a Christian poetics that culminates in the Divine Comedy. The author points out not only the commonality but also the sharp contrasts between these writers and shows the relation between their sign theories and the intellectual ferment of the times.

When first published in 1968, The Mirror of Language was recognized as a pathfinding study. This completely revised edition incorporates the scholarship of the intervening years and reflects the refinements of the author's thought. Greater prominence is given to the role of Stoicism, and sharper attention is paid to some of the thinkers and movements surrounding the major thinkers treated. Concerns of semiotics, philosophy, and literary criticism are elucidated further. The original thesis, still controversial, is now even wider ranging and more salient to current intellectual debate.

Colish, Marcia L. (NHC Fellow, 1981–82). The Mirror of Language: A Study in the Medieval Theory of Knowledge. Lincoln: University of Nebraska Press, 1983.