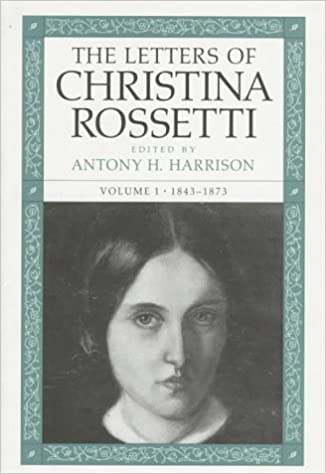 Christina Rossetti (1830–1894) has come to be considered one of the major poets--not just one of the major women poets—of the Victorian era, eclipsing her famous brother. Leading critics have demonstrated how studies of Rossetti’s work, her daily life, her relationships with the Pre-Raphaelites, and her interactions with other women authors of the period can help us understand the unique cultural situation of Victorian women writers. The Letters of Christina Rossetti, four volumes, makes available all of Rossetti’s extant letters, almost two-thirds of which have never before been published. These letters come from over one hundred private and institutional collections, scattered from Scotland to Australia.

The fourth and final volume of the Letters covers the last eight years of Christina Rossetti’s life. In 1887 Rossetti, at the age of fifty-six, was living with her two aged, ailing aunts. In addition to managing the household and nursing her aunts, she published an enlarged edition of her collected poems and, in 1892, wrote her greatest book of devotional prose, The Face of the Deep. She also oversaw the production of a new and enlarged edition of Sing-Song, published in 1893.

As a stay-at-home semi-invalid, she maintained a very large correspondence with friends and family members. Her most intimate relationship was with her sole remaining sibling, William Michael Rossetti, but other correspondents include Amelia Barnard Heimann, Caroline Gemmer, Frederic Shields, Rose Donne Hake, Olivia Garnett, Ellen Proctor, Lisa Wilson, Arthur Symons, and Mackenzie Bell, who became her first biographer. In these letters we discover Rossetti’s views on subjects as diverse as the artistry of her poems, her health, aging, death, gender roles, money, cats, flowers, games, and her own supposed sinfulness.

In May of 1892 Christina Rossetti was diagnosed with breast cancer—her most serious medical crisis since her nearly fatal attack of Graves’ disease in the early 1870s. The cancer was removed, but she suffered a recurrence in September 1894 and died on December 29th of that year.