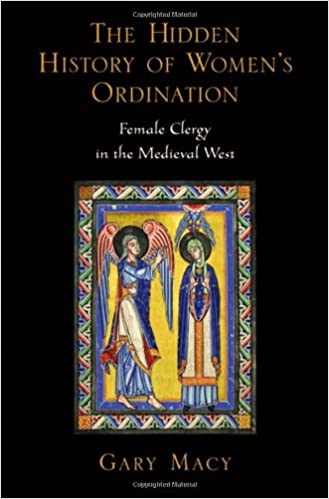 The Roman Catholic leadership still refuses to ordain women officially or even to recognize that women are capable of ordination. But is the widely held assumption that women have always been excluded from such roles historically accurate?

In the early centuries of Christianity, ordination was the process and the ceremony by which one moved to any new ministry (ordo) in the community. By this definition, women were in fact ordained into several ministries. A radical change in the definition of ordination during the eleventh and twelfth centuries not only removed women from the ordained ministry, but also attempted to eradicate any memory of women's ordination in the past. The debate that accompanied this change has left its mark in the literature of the time. However, the triumph of a new definition of ordination as the bestowal of power, particularly the power to confect the Eucharist, so thoroughly dominated western thought and practice by the thirteenth century that the earlier concept of ordination was almost completely erased. The ordination of women, either in the present or in the past, became unthinkable.

References to the ordination of women exist in papal, episcopal and theological documents of the time, and the rites for these ordinations have survived. Yet, many scholars still hold that women, particularly in the western church, were never "really" ordained. A survey of the literature reveals that most scholars use a definition of ordination that would have been unknown in the early middle ages. Thus, the modern determination that women were never ordained, Macy argues, is a premise based on false terms.

Not a work of advocacy, this important book applies indispensable historical background for the ongoing debate about women's ordination.